[This document will be published in three parts, such that Part 1 can be referenced in future conversations, Part 2 deals with a very specific set of account concerns, and Part 3 addresses some long form questions posted to the moderators on Tŵt.]

Part 1 of 3: Background and context on Tŵt Cymru moderation goals and policies.

“Tŵt is the community-led microblogging network for Wales and the Welsh, at home and abroad.”

This is the founding statement for Tŵt, an instance of Mastodon. Mastodon is

“a free and open-source self-hosted social networking service. It allows anyone to host their own server node in the network, and its various separately operated user bases are federated across many different servers. Each operating server has its own code of conduct, terms of service, and moderation policies. This differs from centrally hosted social networks by allowing users to choose a specific server which has policies they agree with, or to leave a server that has policies they disagree with, without losing access to Mastodon's social network.”

In recent weeks, one account on the toot.wales instance of Mastodon has received a report submitted by a fellow user of the service, a community member. Reports are a built-in feature of Mastodon that allow individual members to signal to the server operator that a particular toot or account is in contravention of the server policies, and this then establishes an audit trail for actions taken by moderation staff. Due to the federated nature of the content, this report can be “remote” – a report made by a user of a different server that is seeking to stop that content from coming in to that server; or “local”, a report made by an account on the same server as the offending account.

In both cases, the members with moderator privileges are then able to review the report and act upon it, with generally four possible outcomes: do nothing, warn the user, silence the user, suspend the user.

Before I dig into the particular account in question, the report our staff received, and the community responses to our handling of the report, I’d like to lay out some context for why toot.wales exists, why it’s on Mastodon, and why I am enthusiastic about having this sort of problem to deal with.

My name is Jaz-Michael King. I am a technologist. Born in Cardiff, Wales, I moved around as a young man to England and France and then on to the United States, in 1996. I was fortunate to ride the boom of the World Wide Web, and I built a lot of Web sites for a lot of people, including a number of large, successful communities.

Having been homeless at a very young age, the Internet – and the World Wide Web – opened up a world I had never seen or thought I would be privileged to participate in. Opportunities for me to join communities I had never been exposed to, to learn subject matter I otherwise would not have access to, and I took immense joy in the egalitarian nature of a free and open movement founded on open source software.

As a software developer myself, I contributed where I could to various technologies, and I started a company to empower small businesses to join the Web revolution. I still believe the Internet to be the great equaliser.

Anyone can publish, anyone can speak, anyone can contribute. Having been raised in a repressive, religious environment, the Internet remains to me one of the most powerful forces for equality, sharing, and creativity the world has ever known.

The early Web was enthralling. Market forces of course drove up commercial interest but a certain freedom, rooted in a classless egalitarianism, thrived. But, over time, more and more services fell by the wayside and power, and eyeballs, were slowly concentrated into what we have today: the conglomeration of “Big Tech” that comprises Facebook, Apple, Amazon, Netflix, Google, and Microsoft.

Slowly, much of what was good on the Internet, and especially on the Web, was replaced by mega corporate, centralised services delivered by American companies and their stockholder-serving, profit-driven policies. My personal experience of it all was such that I slowly found myself using the social networking capabilities less and less, and as a lonely, broken-familied, Welshman abroad, this saddened me. The magical thing that I had been a tiny part of creating was being bastardised and turned away from what I believed its purpose was.

The World Wide Web was created by Tim Berners-Lee, someone whom I have long supported. Supporting someone doesn’t mean I agree with every single thing that person says or does, but I support the goal and purpose of the WWW. I’ll let Tim say it in his own words:

When I invented the World Wide Web as an information sharing system in 1989, I aimed to create a neutral space where everyone could create, share, debate, innovate, learn and dream. That’s why I gave my invention away for free, so that anyone, anywhere could access and build on it without permission. My vision was an online space that would give people freedom — and America’s entrepreneurial, optimistic spirit embraced it with enthusiasm. In the early days, there was a wonderful spirit of empowerment of individuals. I could read any blog I liked, and I could write my own blog with links pointing to my favorite things. Anyone could put their small business online. Now that vision is threatened. That choice you have to use the Web for whatever you want could be taken away.

I couldn't agree more. Having dabbled with some of the larger social networks, I became more and more disdainful of their intrusion into my privacy. I tried building small solutions to this problem for myself, but I failed to inspire participation or demonstrate value to my circle of friends, for whom Facebook et al offered far too much ease coupled with a strong social graph of their friends. It’s where most of the people they know, are.

Now, being somewhat of a self-starter I’ve never shied away from trying to fix something myself. And social media was no different. I cannot remember how I first became aware of the Mastodon project, but my spidey senses started tingling immediately. Open source? Check. Use of World Wide Web Consortium standards? Check. Mission statement I can get behind? Check.

Several features made immediate, welcoming sense. A simple mute option means you control what’s in your feed. If you disagree with something, mute it. You have the control, not the company, not the platform. A general mission to provide better tools for managing abusive behaviour, baked in to the product itself, means I can leverage all the good work that reflects that particular corner of the zeitgeist.

Self-hosting based on W3C standards means the service can outlive the founder’s personal energy levels. And of course, portability. The opportunity to build a community that can live or die on members being able to quickly vote with their feet by porting their account to the server of their choosing (see https://blog.joinmastodon.org/2019/06/how-to-migrate-from-one-server-to-another/) means that given a large enough user base, the community should be able to self-manage, empowered by their own freedom to manage their own experience, their own data.

These are the things I myself want in a social media service, and I’m willing to bet my own money there are others like me. So, I started a server.

I was stuck on whether or not to run a “generalist” instance or something more narrow. I opted to combine free, open, safe social media with a means to encourage and promote the use of Welsh language online. My nation’s cultural heritage has been under attack for some time now, and the language has a peculiar place in the broader context of the United Kingdoms.

A renewed zeal for Welsh language learning, a growing sense of pride in our shared traditions rekindled by an empowered, devolved national government meant I could simultaneously participate in the Cymraeg 2050 program, a Welsh Government initiative to get the native speaking population up to a million by 2050. To this end several translators were hired to ensure a complete translation of the service into Welsh was completed.

So, toot.wales, or Tŵt Cymru, was born. To ensure that it would not turn into my personal dictatorship, or in any way become something from which profit could be harvested, I incorporated a charitable corporation, invited three people to the board, and established governance that can survive me.

The charity is now funded to independently support the service for quite some time, in terms of paying the hosting bills and domain name fees and such. No individual is paid in any way by the charitable corporation. Our governance is described at https://toot.wales/about/more#governance

As part of administering a self-hosted instance of the service, I needed to come up with an easily understood, and easily defended code of conduct. This code of conduct is available for all to see, at https://toot.wales/about/more#community-guidelines – it is not set in stone and has been edited once to broaden the scope of “Excessive Advertising” to include “new accounts used solely for advertising”. It can, and likely will be edited again in the future as the community finds a way to express itself clearly.

In addition, we are signed on to the Mastodon Covenant, the terms of which can be reviewed at https://joinmastodon.org/covenant – which signal to the wider community that we, as a self-hosted instance of Mastodon, concur and covenant with the founding developer as to the desired nature of the social network service offering. 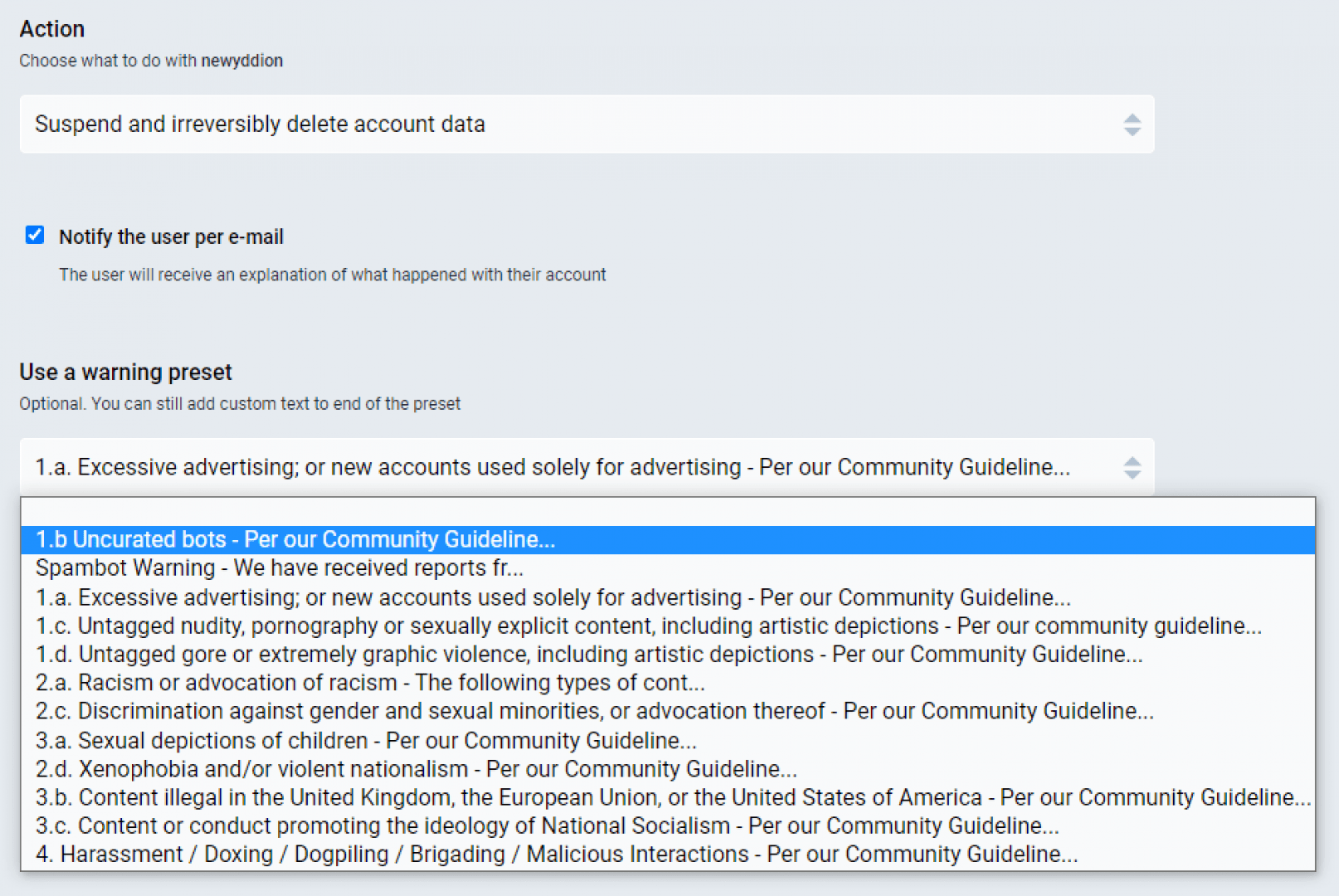 The expectation is that the moderator can clearly point to which of our Community Guidelines is driving the action.This helps ensure consistency in moderation. Currently our audit log has just under 1,000 records of actions taken by moderators, and these are visible to all staff.

This, I believe, forms a fundamental foundation for a strong community network with a clear roadmap for sustainable growth and continued self-moderation. The moderators currently volunteering their time and energy have demonstrated both their commitment and agreement with the mission statement of toot.wales, and an ability to moderate, or, more importantly, to be moderate. The term stems from the ability to hold the middle ground, to see both sides, to be reasonable, to not be extreme. And that ability is vital in preserving a fair, consistent code of conduct.

This is especially important in the context of Mastodon. I, clearly, do not hold “moderate” views. I believe mega corporate social media networks are bad for society. This is an extreme view. As I am human, I also have extreme views on certain politics, certain hobbies, certain foods. None of these should be on display as administrator and founder of this instance, if I want to foster a moderate community.

toot.wales is “the community-led microblogging network for Wales and the Welsh, at home and abroad”. This is pretty inclusive. I do not – for example – overtly support a particular political party. I have kept my personal views on Welsh independence away from the service. I do not comment on inflammatory content, or content that seeks to elicit a particular response (unless acting in good faith in service of the Community Guidelines).

Which brings me to the issue of being asked to remove accounts from the service, the content of which some people find disagreeable.